As a project management expert, you know that: Lessons Learned meetings are an essential tool. Agile teams take this a step further. With agile retrospectives, you start thinking about the lessons learned and how to improve the collaboration even before the project is over – starting at the very beginning and continuing at regular intervals.

Such agile retrospectives aid the continual improvement of processes, methods, and teamwork.

This article covers the following topics:

Let us get started!

What Is an Agile Retrospective?

The basic concept of a retrospective is anchored in the 12th principle of the agile manifesto: “At regular intervals, the team reflects on how to become more effective, then tunes and adjusts its behavior accordingly.”

Agile teams work in preferably short intervals called iterations (called “Sprints” in Scrum). These can be viewed as development cycles, but they also represent learning cycles because it is assumed that complex endeavors require a step-by-step approach in which it is necessary to frequently pause to evaluate oneself and the (intermediate) results. “Inspect & adapt” rituals are therefore a key ingredient of each iteration.

This gives you the opportunity to significantly influence the further course of your project. Three factors are analyzed and, if necessary, adapted:

What remains are the aspects processes and teamwork – which the agile retrospective meetings are designed to address. The retrospective is held at the end of an iteration, just as with the review. 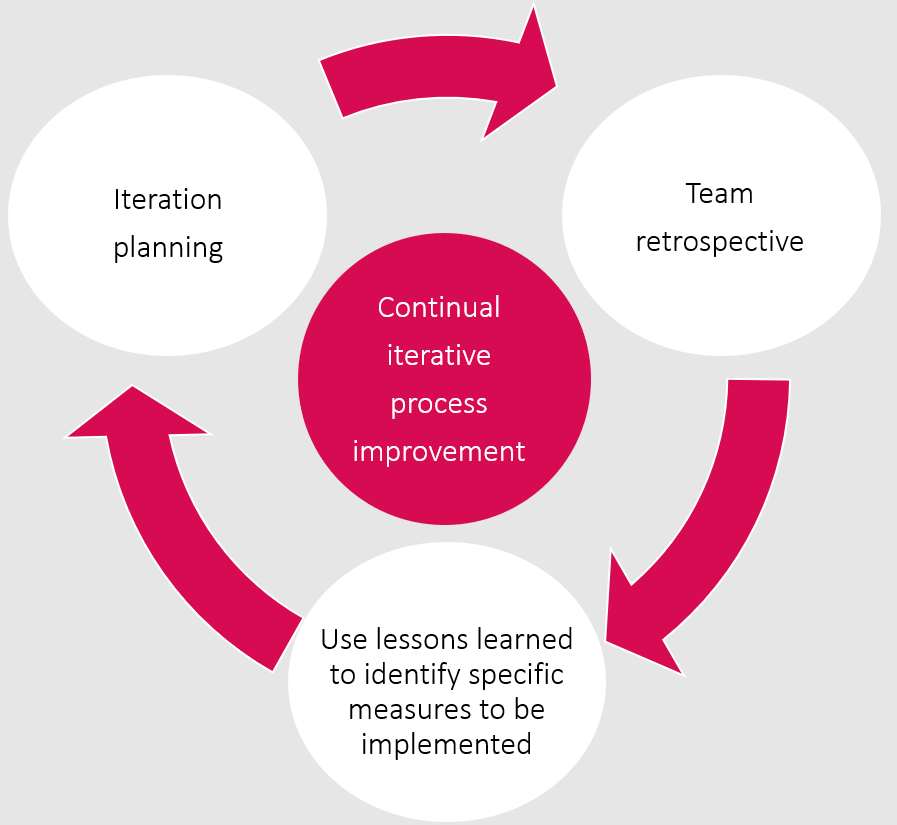 Retrospectives promote the continual, iterative improvement of the processes in the current project.

Retrospectives thereby differ from the Lessons Learned meetings used in traditional project management, especially with regard to the timing and frequency. Projects planned in the traditional manner generally have the project manager meeting with the team when the project has concluded to discuss what happened and the lessons learned. With agile teams, this happens on a regular basis after each iteration – before the next iteration begins. This enables you to immediately apply what you have learned to the current project, instead of merely gathering these findings to use on some future project.

What Should a Retrospective Include?

Stakeholders can be invited to attend a retrospective meeting, but their presence is normally not necessary. If the team wants to speak openly and honestly about the iteration that just ended, having stakeholders present can be a hindrance.

Agile coaches (a “Scrum Master” in a Scrum Team) help the team identify good practices and possible improvements that can be used in the next iteration. A retrospective is therefore a joint team event – and experienced coaches always have a sufficient repertoire of formats to support this effort.

Candor and honesty are therefore essential in a retrospective.

Although the team might be quite satisfied with its accomplishments, with the team members congratulating themselves on a job well done, it is also important to be open about any critical issues and discuss these. This includes any feelings and emotions.

Provide a safe space for dealing with these.

At a minimum, the following people should participate:

How Should a Retrospective be Organized?

A retrospective typically takes up to three hours, depending on the length of the iteration being reviewed.

Experience has shown that a meeting with five phases is most effective:

Which Formats Are Best for Holding a Retrospective?

Generally speaking, no special format is necessary for holding a retrospective, with its individual phases, for your team. It is also not necessary to strictly follow each of the individual steps listed here, although the meeting generally quickly progresses from one step to another. The important thing is to end the meeting with an agreement on 1-2 specific improvements for the next iteration.

Experience has shown that the team often runs out of ideas and loses creativity after a few retrospectives. There is then an urge to abolish these meetings. Or the project team still has no idea how to ensure that the retrospectives are productive and creative.

For these situations, there is a wealth of formats and moderation techniques for engaging your team and making it easier and much more exciting for the team to work on improvement processes.

Our tip: A website with a trove of good ideas is Retromat: it provides formats for every phase of the retrospective. In the next section, we present a selection of these.

Please note: Teams generally enjoy trying these various techniques, but they can also be a bit overwhelming or exhausting. So, keep in mind that: less is more.

Experienced team coaches use 1-2 formats per retrospective. Some formats they repeat occasionally to avoid asking too much of the team. They sometimes completely omit one or the other a few times in between.

Choose the formats best suited to your team’s level of development or experience. The “starfish” is a classic format that is easy to use and understand and even works remotely if you use an electronic whiteboard.

For a format such as “Writing The Unspeakable”, on the other hand, you need a team that can meet undisturbed in a separate room and has members that know and trust each other well.

Our tip: Gently introduce your team to the latest retrospective techniques. Choose a rather simple format. Over time, you can progress to more demanding techniques.

Do many of the issues discussed deal with your environment in which the team works? If so, it makes sense to involve the stakeholders as well at some point.

You might also enjoy reading our blog article on agile contract models.

ESVP: Each team member is asked, in turn, which of these they feel like in today’s retrospective meeting:

Each person writes the first letter of their choice on a piece of paper, and the papers are collected anonymously. If any of the papers show a V or a P, this is discussed. Why does someone feel like a “vacationer” or a “prisoner” in this meeting? What needs to change to improve the team’s attitude toward the retrospective?

Sailboat / Motor yacht: The retrospective participants together view a picture of a boat on a flipchart or something similar and then, after writing the issues important to them on sticky notes, paste these sticky notes on the area of the picture they feel best represents their issue. Is the issue related to something that: 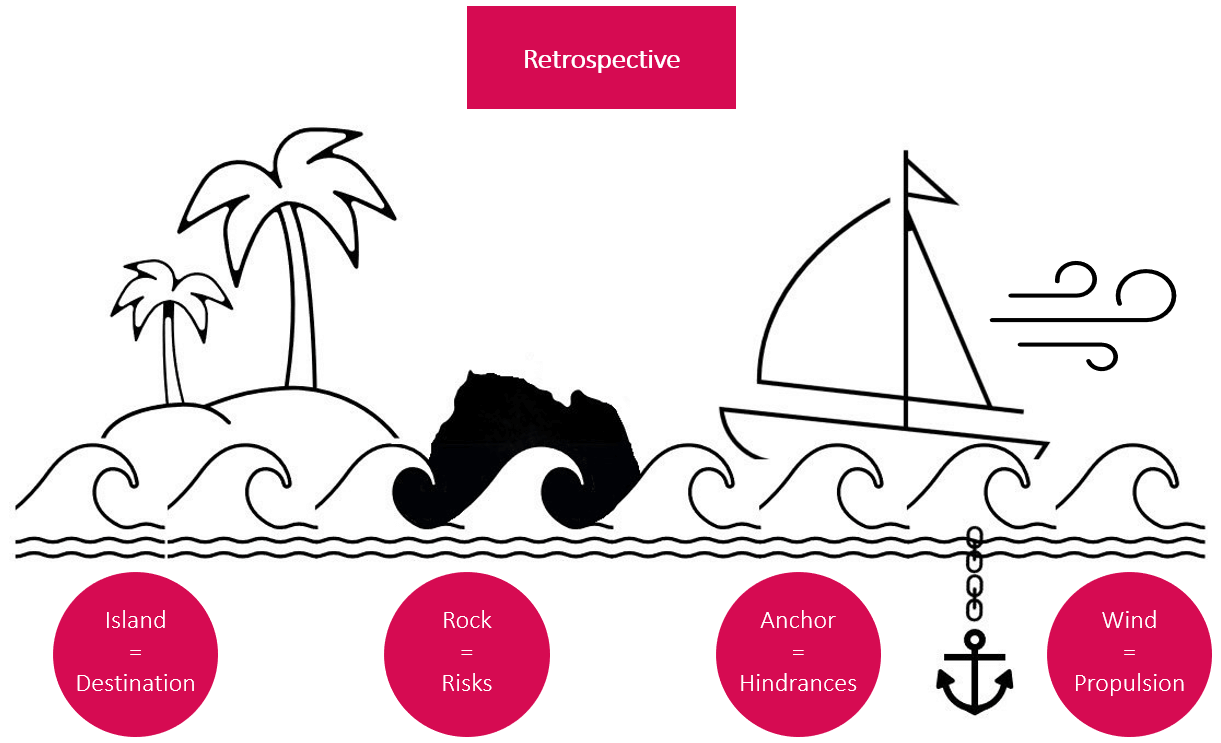 Often used by teams to collect information during a retrospective: The sailboat
(downloadable template available below figure)

Our download tip: Here is the template for holding a remote retrospective using the sailboat exercise. You can copy and use it for retrospectives with your team.

5 Whys: Originally developed by former Toyota CEO Taichii Ohno. Just as a child would do, we ask the question Why? five times. Let us look at an example.

Problem: We missed the delivery deadline for our new product version.

Why was an important hardware update planned for the exact same time?
Because the priorities for the team were not clearly set and planned.

Why were the team’s priorities not clearly defined and scheduled?
Because the stakeholders disagreed which was more important.

What caused the problem? Conflicting priorities among the stakeholders; the priorities were not coordinated well.

Taiichi Ohno believed the source of the problem would be pretty clear after the fifth “Why?” question. After doing this exercise, you can discuss the result and brainstorm ideas for avoiding this problem in the future. For example, it might be helpful to escalate the problem to the next higher level or help stakeholders reach an agreement.

Using colored dots to vote: Present the measures suggested in the retrospective phases and then ask participants to vote on these using the colored dots they have been given. Each person is given two or three colored dots to allocate as they see fit to indicate the measures they deem most important. They can give all their dots to a single measure or distribute them among several measures. The measure with the most dots is implemented in the next iteration.

Respect and appreciation: Each team member is asked to personally thank or praise another participant for something specific that that person contributed to the project. It can be for help they gave or their strong commitment. After everyone has contributed, the retrospective can be concluded.

Some of the formats discussed above are intended for groups meeting in-person in a room. Project teams are increasingly global though and collaborating remotely. That does not preclude the use of innovative retrospective formats though.

In the retrospective, it helps to not only have a good videoconferencing tool (ideally with the webcams turned on so that everyone can see each other), but also the following tools:

Possible templates for 3 and 4: the sailboat graphic in the figure above (downloadable directly below that figure). 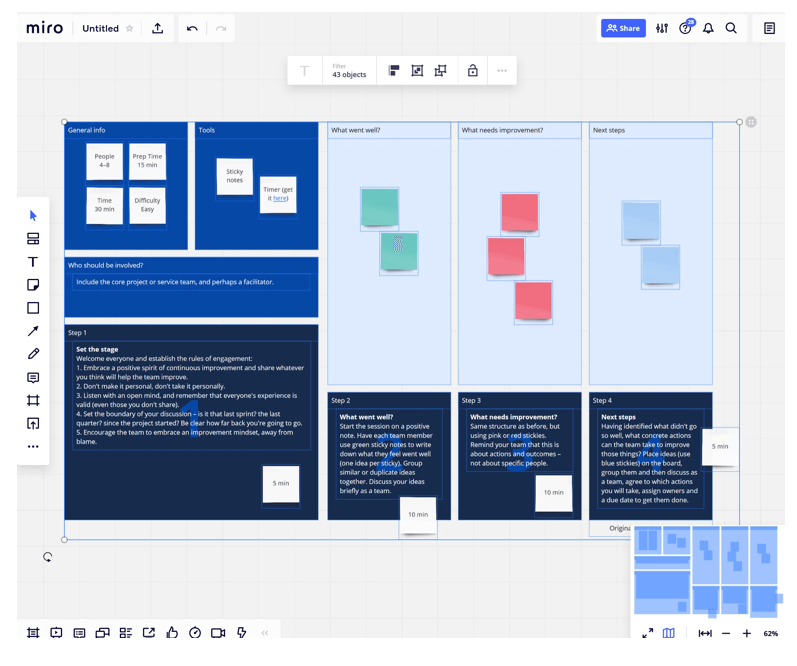 Template for team retrospectives in the “Miro” software program.

Is your team a group of experienced professionals already very familiar with retrospectives? If so, here are a few new other things you can try: 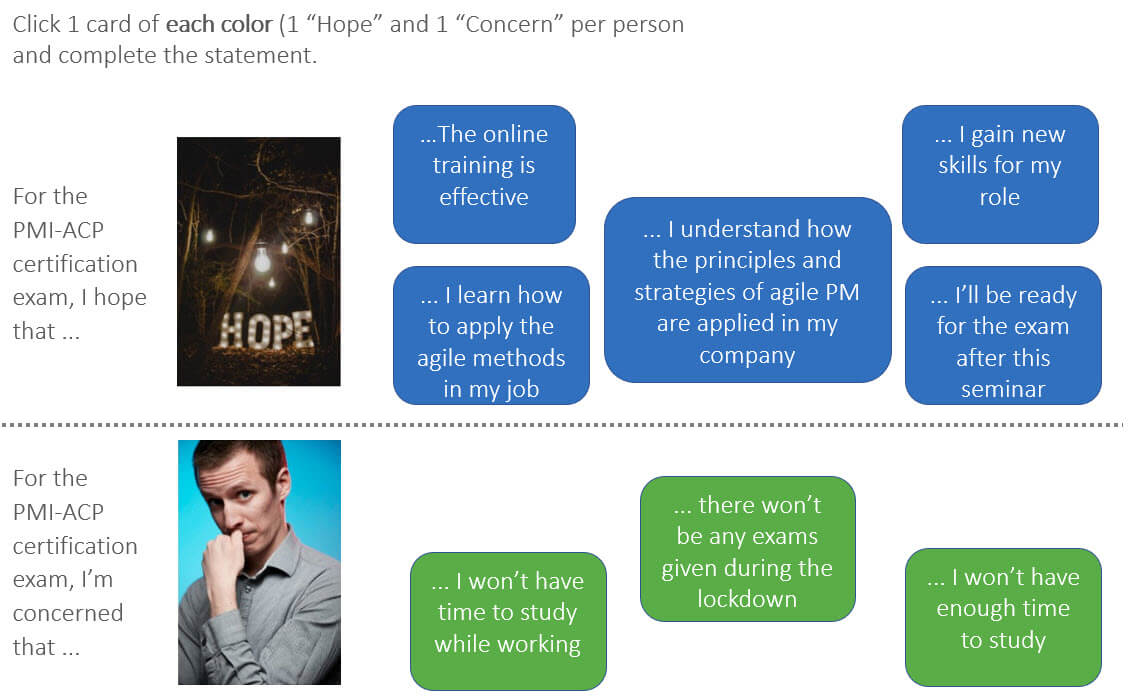 “Hopes & Concerns” – virtually presented as part of a certification seminar (the results have been anonymized.)

It is also enlightening to repeat an exercise such as this at the project’s halfway point to see what has changed since the project began.

Tip for beginners: 1-2-4-all: A topic is presented (to encourage more fun and creativity, the question can be formulated in a negative way. For example: “What is the best way to hamper our company’s agility?”).

Tip for beginners: White Elephant Sizing: The group estimates the work using T-shirt sizes as a reference. This gives the participants a feel for estimating the relative scope in agile projects. In a retrospective, you could ask the participants to start by estimating the amount of work involved in ordinary home activities (such as vacuum cleaning, decluttering a closet, renovating a kitchen, or cooking a meal) and then discuss within the team how each person arrived at these estimates. The insights gained can be used in the next iteration when it is time to estimate the effort involved in fulfilling “real” requirements. 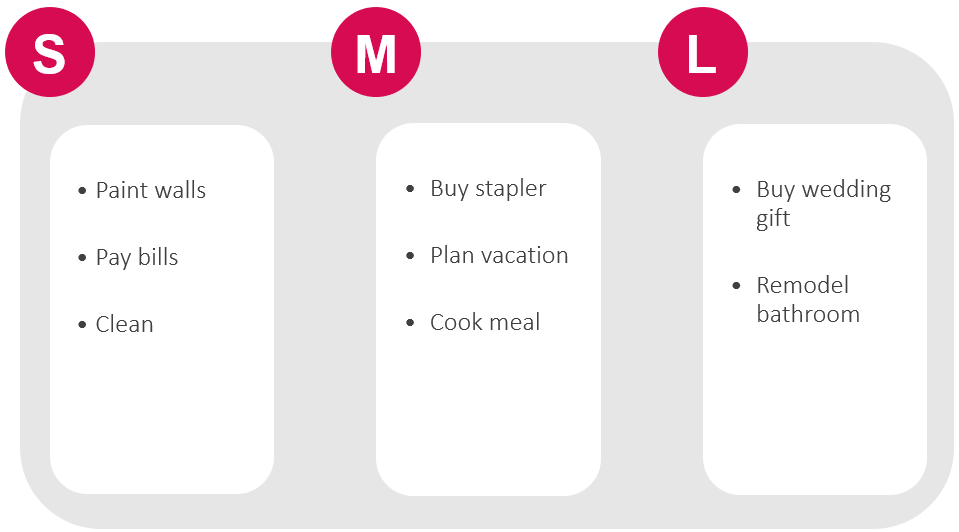 What Happens After the Retrospective?

You should therefore document these suggested improvements in a backlog.

Treat these with the same diligence as a functional or technical requirement in the next planning meeting: as something that must be planned and accomplished.

You can use metrics such as these to track the success of the implementation:

In this article, you have read about:

Please send us your feedback. What has been your experience with retrospectives and possibly with specialized methods? Can you offer any tips for working with remote teams? We look forward to hearing from you! 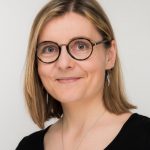 Antje Lehmann-Benz, PMP, is a project management instructor with a special focus on agile issues and scrum seminars. She also has experience in providing software training (JIRA and Confluence) and consulting. In addition to instructing on frameworks and theory, she is also experienced in the use of agile games and practical exercises to reinforce the knowledge gained.

Read more about Antje Lehmann-Benz on LinkedIn and XING.